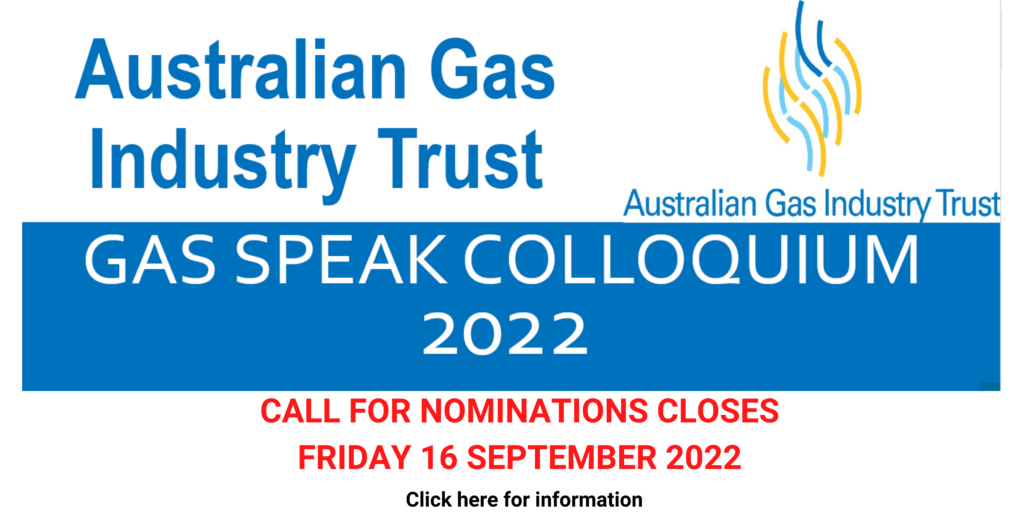 Since its founding in 1999, AGIT has contributed to helping improve the capability of the gas industry. AGIT works alongside our industry partners to build a more secure and sustainable energy future for Australia.

WHAT WE DO
OUR PRIORITIES
OUR STRATEGIC VIEW 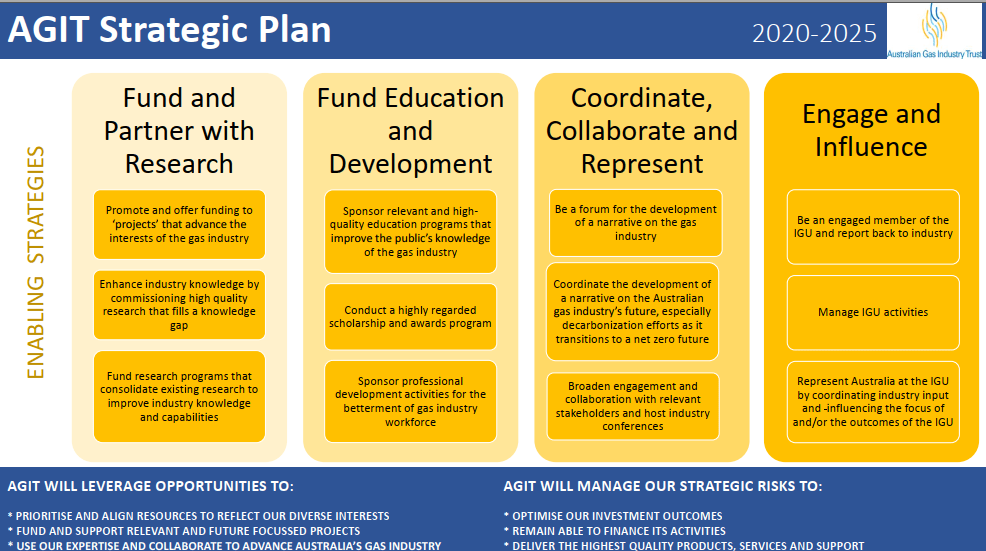 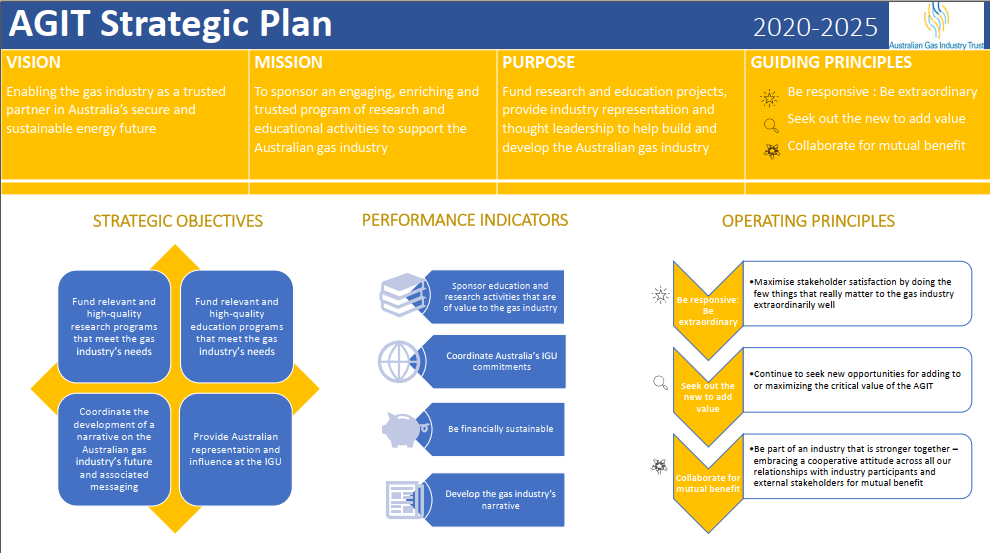 A collaborative research project investigating the changing role of gas in GPG. AEMO’s forecasts were also interrogated and the relative costs of different generation and storage technologies were compared.

AGIT contributed $50,000 towards a study to provide information regarding household gas connections, appliance and connection trends and drivers. The study seeks to better understand how gas is used within the homes, the types and number of appliances in homes and the trends in new and/or competing appliances that could impact on how gas is used within the home. The intent of this study is to establish a baseline that can be used in ongoing benchmarking activities where the data will be updated annually to identify year on year movement in gas appliances across gas networks.

AGIT has contributed $50,000 towards a study to investigate the technical and commercial implications of the three transformation technologies (hydrogen, biogas and carbon capture and storage) to achieve near-zero carbon emissions by 2050. The study aims to provide a better understanding of the different roles these technologies can play in decarbonising Australian gas networks and the implications for Australian industry.

AGIT’s current research priorities include, but are not limited to, the following:

AGIT is always looking for ways to support the gas industry. If you think your organisation, and or idea, is a good fit and partnering with us can provide value to the gas industry please check out funding application section below.

AGIT is the primary sponsor of the “Next Generation Schools Program” providing $49,500 over three years. This successful program is a school, industry and community partnership facilitated by the Petroleum Club of Western Australia since 1991. It helped expose high school students to the world of work in the petroleum industry through project activity and fosters a relationship with an industry mentor. It helps the industry build better awareness of its activities and its contribution to the Australian economy and society.

Funding over two years for the APGA Women’s Leadership Development program which aims at enhancing diversity and inclusion within the pipeline industry by providing a more supportive and open environment for women.

AGIT assisted with funding an inaugural meeting of young people in the pipeline industry to form a group known as the APGA Young Pipeliners Forum (YPF) in 2006. The YPF provides a means for young people forging a career in the pipeline and gas industry to get together and to organise events where they share knowledge, learn from more experienced pipeliners and have fun. The YPF operates in all Australian states and territories and in New Zealand and is organised and run by the YPF members. AGIT assisted with funding the 10 year Ten-Year Anniversary Seminar/Workshop bringing YPF and industry leaders together again in Canberra to celebrate the success of the first decade and plan and set goals for the next decade.

Funding has been provided since 2005 to assist young pipeline engineers attend international biennial research Joint Technical Meetings of the Australian Pipelines and Gas Association Research and Standards Committee, the Pipeline Research Council International and the European Pipeline Research Group. The three organisations cooperate with and share information on research and projects. Scholarship groups attend the JTM meeting and visit a number of gas related organisations and research organisations to observe facilities and the work being carried out. Attending the JTM and study tour enhances the engineer’s professional development and assists with the sharing of knowledge to benefit the employer and the industry in Australia.

AGIT provided $14,250 as funding to the Master Plumbers Association which successfully funded five scholarship places to individual plumbers to undertake and complete the course CPCPGS4022A Service Type A Appliance during 2015. In addition, a grant of $10,000 was issued for the development of post graduate training course CPCPGS4011A Design and Size Consumer Gas Installations for plumbers who wish to gain a licence in gas – this has to be completed prior to plumbers undertaking the Victorian Building Authority licence examination.
Current & Future Education Priorities

AGIT’s current education priorities include, but are not limited to, the following:

Advocate for industry research and education activities including

Major sponsor of the Surat Basin Energy Awards celebrating the economic, social and personal contribution that the energy sector injects into the Surat region and recognising the people, business and industries that have helped shape the regions new energy industries.

AGIT provided around $25,000 to The Norwood Resource. The funds contributes to creating an online library, social media resource and presence to assist, assemble and disseminate factual, scientific and verifiable information about the environmental impacts of oil and gas exploration and production. This establishes (and maintains) a centre of expertise about the oil and gas exploration and production industries and best practice environmental protection knowledge and outcomes.
Current & Future Advocacy Priorities

AGIT’s current advocacy priorities include, but are not limited to, the following:

The International Gas Union (IGU) was founded in 1931. As of June 2020, the IGU has 85 Charter members, 15 Premium Associate Members and 62 Associate Members in 5 Continents. It is a worldwide non-profit organisation registered in Vevey, Switzerland with the Secretariat currently located in Barcelona, Spain. The mission of IGU is to advocate gas as an integral part of a sustainable global energy system, and to promote the political, technical and economic progress of the gas industry. Australia has close involvement with IGU
Past & Present IGU sponsored activities

AGIT funded Ms Susie Smith as a member of the IGU Methane Emissions Technical Experts Working Group to attend meetings and assist with the work of the group.

Specifically the IGU seeks to engage with the IEA and G20, as both groups are considering this matter. Furthermore, as several interest groups continue to advocate against the role of natural gas in a low carbon economy, the natural gas industry needs to provide a counter view – ‘if you are not part of the solution, you are part of the problem’.

The IGU will produce a publication that affirms the importance of the transition to a low carbon economy and the role of natural gas in this economy. Whilst the publication will refer to the importance of robust measurement methodologies and public disclosure, the focus will be on the initiatives the industry is already undertaking to reduce methane emissions.

AGIT has been involved with the IGU Triennial Work Program (TWP) since inception. The TWP lays out the work and activities that the IGU committees and task forces will carry out during the next three years of the Presidential Triennium. The focus and aim is to support the mission of the organisation while at the same time contributing to the IGU’s efforts towards becoming the global voice of gas.

AGIT nominates Australian gas industry representatives to join and support the work of the committees and to assist active participants attend meetings. A number of Australian representatives have been and are chairs or vice-chairs. The list of people currently involved is available here.

Korea holds the IGU presidency from June 2018 to June 2012. The theme for this research period (triennium) is A Sustainable Future – Powered by Gas. With the strategic focus of the Committees and Task Forces being on access, markets and social licence and, to achieve this, 11 committees and 3 task forces have been established.

Want to know more about the IGU Click here (https://igu.org/)

Korea currently holds the IGU presidency from 2018 to 2021. The theme for this research period (triennium) is A Sustainable Future – Powered by Gas. The following three areas of strategic focus were established: Environmental Leadership; Market Vitality and Value Creation. Against this backdrop the overarching aim of 2018-2021 triennium will be to advance and ensure a role for gas in a sustainable energy future.

You can nominate to be a member of a committee at any point during the IGU research period. Membership can mean attending meetings (held every six months throughout the three-year research triennia) or by correspondence only, where you will be expected to assist in opinions, surveys and project/industry input. All nominations must be approved by AGIT.

AGIT is always looking for volunteers to help committee members, if you are interested please contact us. (jthompson@agit.org.au) 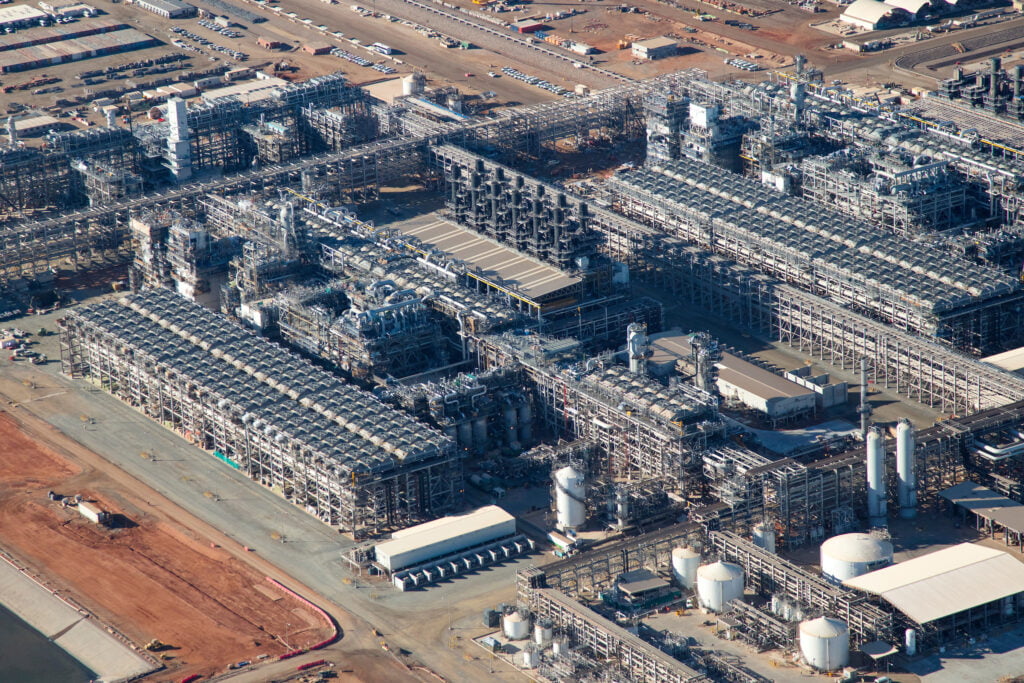 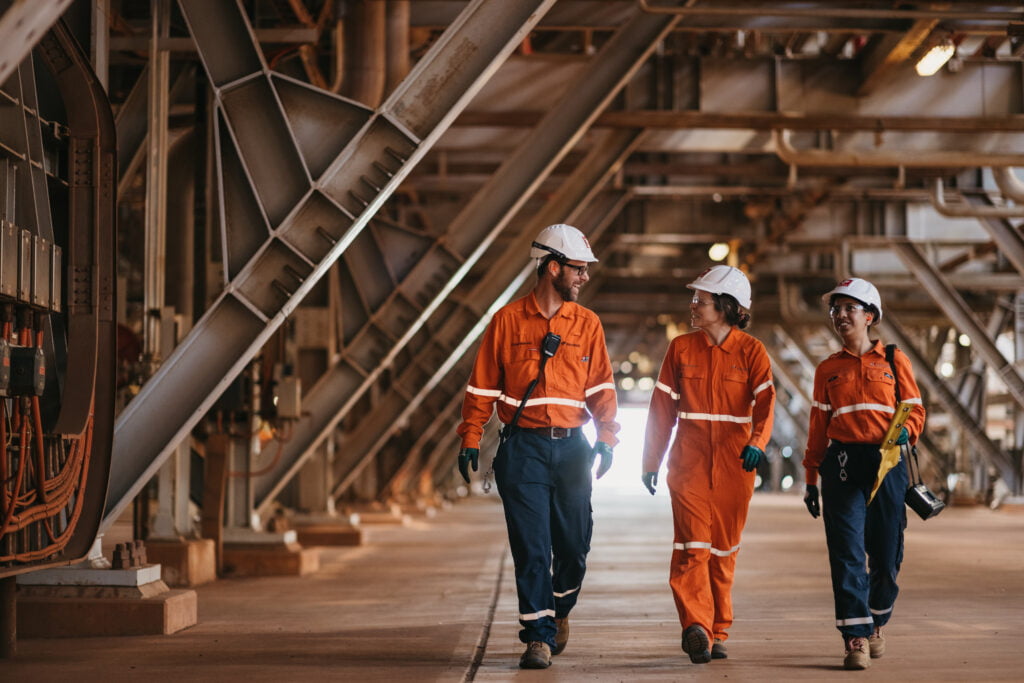 Delivering the pathway to net zero for Australia – 2022 Outlook

AGIT-Jemena’s The role of gas in the transition to net-zero power generation (Summary): Frontier Economics

AGIT-Jemena’s The role of gas in the transition to net-zero power generation (Full Report): Frontier Economics

Pipelines vs Powerlines: a summary

Pipelines vs Powerlines: A Technoeconomic Analysis in the Australian Context

Pipelines vs Powerlines: Appendix 3A and 3B Results summary

The following opportunities are currently open: 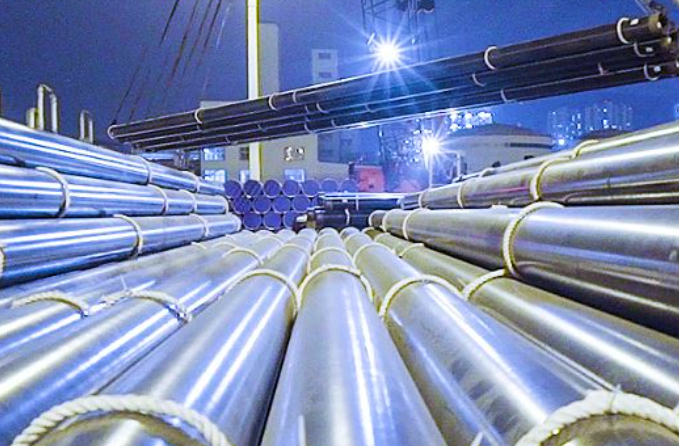